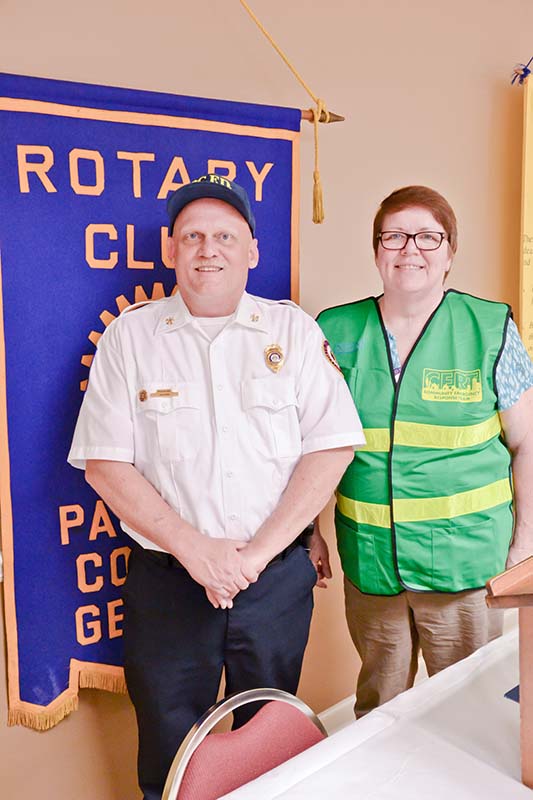 Paulding County Rotary Club president Travis Miller brought the meeting to order for April 18, 2017. Upon completing the updates for scheduled events Mr. Miller turned the meeting over to Jackie Crum of the Ragsdale Inn. Ms. Crum invited her friend Kevin New of the Paulding County Fire Department.
Mr. New began by thanking the Paulding County Rotary Club for the opportunity to speak to the members. Mr. New shared with the Rotary club members information about CERT volunteers and their importance to the community of Paulding County. CERT is an acronym for Community Emergency Response Team. During times of emergency such as severe weather, natural disasters or extreme emergencies such as fire emergency responders can become overwhelmed in dealing with these types of emergencies. These emergency responders are volunteers from the community. They are concerned business owners, teachers, doctors, and retirees have volunteered their time to take emergency response training and be available as support staff to our full-time emergency responders.
Mr. New went into further detail about how emergency responders have to consider some of the worst-case scenarios that could happen when we have large-scale events such as concerts and fireworks displays. Should there be a fire or some other form of emergency, CERT volunteers are identified with badges and vests that would help them to extend the reach of emergency responders in directing people where to go and how to exit the area in an orderly fashion so that the emergency situations would not compound itself. Additionally, at large-scale community events, there are usually children that become separated from their groups and parents. Identifiable volunteers such as these can help to locate and reunite these lost family members.
Mr. New recounted several of the important emergencies in recent history that CERT members would have been tremendous help had the group been formed. In the flood of 2009 Paulding County was hit very hard 600 families were displaced as that number of homes were severely damaged left uninhabitable. With such a large number of community residents in need, the CERT members were invaluable in helping extend the reach of emergency responders who had become overwhelmed and spread thin in dealing with this emergency. Also, in 2014 as you'll remember the snowstorm that stranded school buses on the highway leaving 3000 children trapped for over 12 hours on their school buses. In addition to the bus drivers being extremely helpful, CERT members would have been able to offer the much-needed extra support to the emergency responders. Unable to release children to just anyone having CERT members would have been a tremendous asset, having been vetted as well as trained in helping to establish security as well as emergency services. These were some events that CERT Team members would be vital, and that triggered the movement in forming the team. 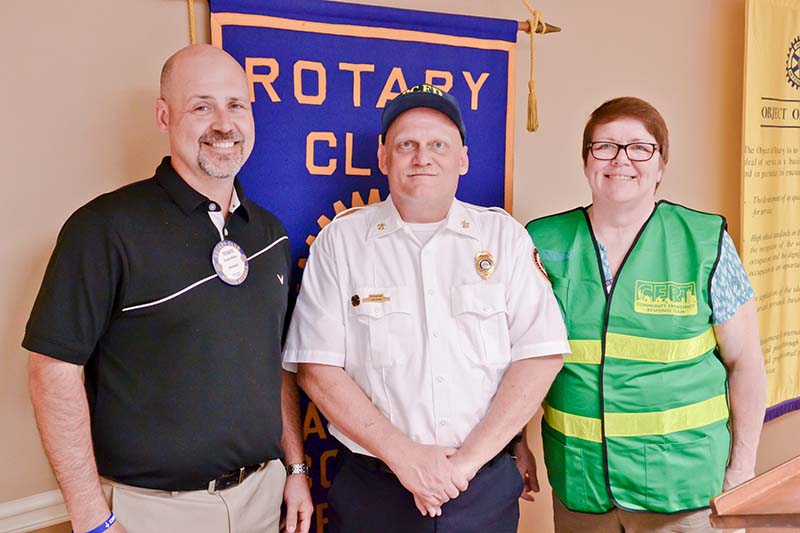 CERT members receive training and some basic safety gear via grants. Paulding County provides them with the radio that can help them communicate with the emergency responders radio systems. These emergency responder volunteers are a huge asset to the Paulding County community and have devoted their time to being ready to support the community in case of emergency. They received training such as basic first aid, house to house and large land area search, CPR, fire control, and emergency shelter management training. There is additional training that is made available which are covered by the grant and help the county by providing a cost-effective way to manage emergencies. Mr. New went on to say what a wonderful group of volunteers that we have. There are 22 CERT members in the group right now who are ready to respond when needed.
Mr. New thanked the Rotary Club for the opportunity speak and took questions from the club members. Kevin New is a lifelong resident of Paulding County he graduated from Paulding County high school 1985 and has been married for more than 18 years. He began as a volunteer firefighter with Paulding County fire at 16 years of age and became certified and 18. After working with Douglas County fire for five years he became a full-time Firefighter/EMT with Paulding County in 1995 and works there to this day. In 2005 he transitioned to the administration as a fire inspector, and in 2008 to Major of Fire Administration. After receiving his associate's degree in 2013 and bachelor's degree in 2015 Mr. New became Division Chief of Administration. Mr. New continue to study emergency management and has multiple certifications in national incident management systems and is certified as a FEMA Communications Leader Instructor and Technician.