The Paulding County Rotary club had their Annual Senior Cookout at the Wellstar Paulding Nursing Center in Dallas. A beautiful day greeted the Rotary club members as they arrived around 11:30 AM and began to unload 320 meals that they had prepared. Rotary club members Dean Olson and Vic Williams had grilled approximately 80 hot dogs and 140 hamburgers. They were joined by Justin Fuller and Brian Stover who had prepared lettuce, onions, and tomatoes to finish up the burger and hot dog plates for the residents of the nursing facility. Other members of the club arrived with drinks and the rest of the additions to the meals such as chips, cookies, and baked beans.
Rotary club members brought everything to the pavilion behind the senior center and began to prepare the meals. The nurses arrived with carts to load up the meals for the residents as they were prepared. Rotary club members worked to perform a production line to prepare the food for the hungry residents. Club members seemed to have a good time preparing the food. As soon as the residents were served all staff members were provided with lunch as well.
The senior residents of the Wellstar facility have little opportunity for home-cooked meal, much less grilled hamburgers and hotdogs. Most residents really enjoy the meal and look forward to it. It's nice to know someone out there cares enough to make a difference. 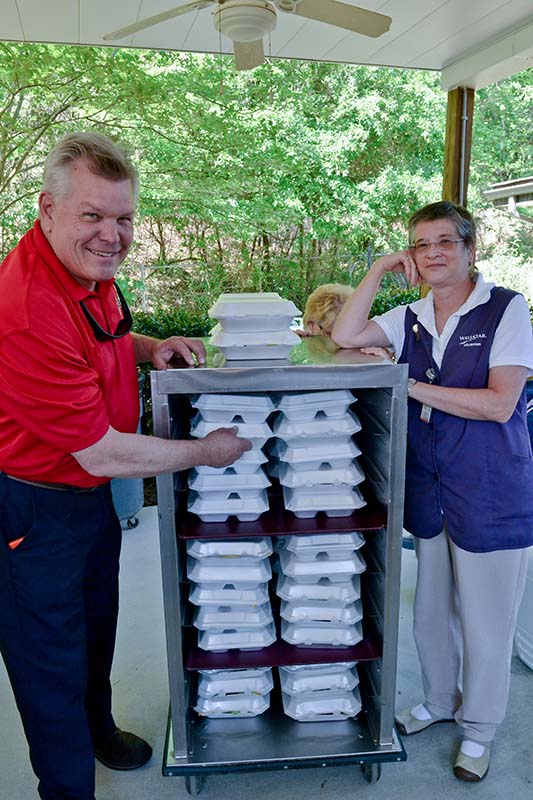